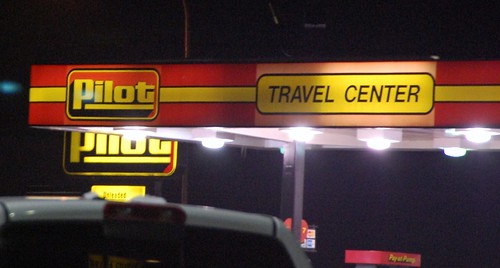 Long story short: they are (or were in the early 90’s) a good company; they treated us well when we made a mistake.

Longer: In the early 90’s, I worked for my dad; my office job was bidding work. One of the jobs I bid was Pilot Oil’s new location in Terre Haute; one unusual point in the bid document was that the brand and color of the exterior finish was explicitly specified. As it wasn’t a brand we usually dealt with, it wasn’t in any of our product notes; Dad called the manufacturer to get the MSDS and product info sheets. They either couldn’t or didn’t fax them over; instead, they gave us the bare minimum data: the coverage rate.

For finishes (paints), the rate is specified in square feet per gallon for each surface type (pdf). For a CMU finish like this, the specs usually include smooth-faced CMU, rough-faced (split) CMU, and the like. The number we got was so many [’]/g; I remember it seemed really high, but I also remember Dad asking the guy on the phone if that was the rough-faced CMU coverage; the number we worked from was, of course, the smooth-faced CMU number.

The guys on site had no idea about the coverage rates, but they knew the first coat was wrapped up and there was not enough finish to get the second coat done.

There are a couple options here. One is to paint up to a line, say a finish change, and forget the rest. Pilot Oil buildings used to have a band of smooth CMU about eight feet up; paint to this line, and if the customer notices the color difference, you just say it’s a trick of light. Another would be to cut the finish (over-thin it). The risks are leaving too thin a finish; also, the tints and binders will come out of solution at different times, and the paint will streak. Another option is to buy more paint and finish the job correctly.

We chose the third course. While we didn’t need much paint, it was expensive, an odd lot, and we had to have it rushed instead of taking the slow boat; all custom touches that meant the cost of the finish was greater than the profit on the job. These things happen.

Dad wrote a letter to Pilot explaining what happened, and what the cost delta was. I don’t remember the content of the letter much beyond that. The next two events happened in close proximity; the dust of time makes it impossible for me to tell you which happened first.

One, we got a check from Pilot for the overage on paint; two, the roof on Pilot leaked.

That they paid us when they didn’t have to is why I shop there; Pilot Oil was under no contractual obligation to us, yet they treated us well.

To finish the roof leak, story, though:

The leak caused somewhat of a production; the roof shouldn’t leak on a new building. The owner calls the general contractor; the general calls any sub that got anywhere near the roof. Everyone calls lawyers.

When finish schedules are written, they’re written in mils; as in, this surface will be covered with this finish for this many mils. In practice, you look at the product guide; this tells you the number of mils per coat, you find out how many coats you need, and it’s two coats of finish. This sounds risky, because you don’t really know if a finish is so many mils over the entire surface; however, in practice, it works well enough. Nobody checks mils.

Until the roof leaks.

Meeting day, everyone shows up; we all go up to the roof. It is every sub’s ass on the line; someone is paying for this roof, and it isn’t the general. We all carry performance bonds (insurance) on each project; this means the bond agents are there. Having to pay $50,000 for water damage and a new roof would dwarf the profit on an $8000 paint job; if the failure is our fault, we will never get bonded at an affordable rate again. Our ability to be bonded, and therefore bid commercial jobs, is on the line.

The lawyers for the owner brought in an inspector that said “the leak is on the south side. There aren’t any mechanicals in the area (the HVAC guys all sigh relief and leave). There are lights, flashing, roofing, and finish.” That leaves, basically, the electrical contractor, the roofing contractor, and us.

The schedules come out. The roof is to be so thick and of this type material. Up on the roof everyone goes; the inspector cuts out a small section of roofing material from the backside of the CMU. The calipers come out. It passes. It is to be bonded with a failure load of so many pounds. He attaches a spring scale and a clamp and pulls. It does not fail at the design load. This is repeated along the bonding area. The roof passes.

The fixtures (lights) are pulled apart and checked; they’re dry inside, which means water is not passing through them. The seals against the CMU are dry, so they aren’t leaking. Electrical is off the hook.

A drill comes out; the inspector drills into the CMU. A depth gauge comes out. Mils are read. This is repeated along the roofline. The finish passes everywhere. We’re off the hook.

The end of the story was the flashing was installed incorrectly along the cap of the roofline. This, along with heavy rains and driving winds, let enough water in to seep in to wreck stuff.

How often are mils checked on a finish? Only when it really matters.